Congratulations Tami George and 'Ali' on taking the Championship in Sport Horse in Hand at the American Cup Arabian Show!

Congratulations Tami George and her beautiful 'Mondavi F' on being the I-2 and Grand Prix Champions at Sport Horse Nationals in Idaho!

Congratulations Lindsay Naas and her 'Roy-El's Valentina' on their multiple World title wins in Western Dressage. All of our hard work paid off!

Congratulations Lindsay Naas and Nick Madsen on their world titles in the Western Dressage and Classical Dressage at the Morgan Grand National World Show!

Welcome Rebecca O'Connor and 'Brioso'!
'Brioso' is a beautiful PRE just imported from Spain!
EXCITING NEWS!
As of March 8th 2019, a huge congratulations to Lindsay Naas on the purchase of Sage Mountain Equestrian Center! May all your dreams come true!

Extremely proud of Nick Madsen and B'Ambitious on their stellar Dressage test at the SAzEA show! They scored a 74.1%!!!! So proud of this talented pair! What a future!!

It's official and just happened today! A HUGE CONGRATULATIONS to Tami George on receiving her last score needed for her Gold Medal! So very proud of you! Lots of champagne in order for this very special accomplishment! You deserve it!
What a great start to the show season!! Congratulations to one of our newest members Nick Madsen and 'B'Ambitious' on their Young Rider High Point award at the ADA Spring Celebration, and Alan Webber and his mount 'Aristotle' on achieving his last scores needed for his Bronze Medal! 44 rides done at this show with huge successes, great scores, and great comments from judges Training through Grand Prix. Yay to everyone!

Tania Radda and 'Miguel Al Vida' did great at the Andalusian World Cup!! They ended up Reserve Champs in the Dressage Show Hack class!

Congratulations Christie Jones and her awesome mount 'Claudio' on being USEA Area X Senior Novice Horse of the Year!

CONGRATULATIONS to Tami George on the purchase of her 'dream horse' "Mondavi F"!!!
Excited for the Gold Medal journey!

We have a new duo in the barn! Congratulations Cheryl Potter on purchasing 'MA Sign of the Times'! You two are a great pair! 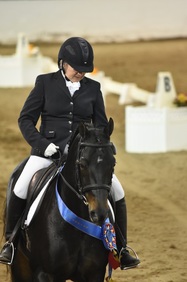 They do it again!! Christie Jones and 'Claudio' were Champions at the 2015 Nutrena USEA American Eventing Championships, placing third in the Adult Amateur Novice and First in the Adult Team Championships. Large amount of competitors in both divisions, WAY TO GO! Christie and Claudio also scored a 74% + and a 68% + winning both of their classes at the ADA Fall Regional Championships.

Outstanding job to Kathleen Downie and her 'Poblano Mor' in their Reserve Championship in the Dressage Suitability at the Andalusian World Cup! So Proud!

Congratulations Kathleen Downie on the purchase of 'Poblano Mor'! A 2009 PRE Stallion. Looking forward to a bright future with these two!

Congratulations to Christie Jones on achieving the scores required for your BRONZE MEDAL!!!

We had a GREAT Morgan National/ World Show in Oklahoma City, receiving National and World title’s!   Congratulations To Lindsay Naas and her special mare ‘Roy Els Belle Of The Ball”  who rode to an Amateur Reserve world Championship, and trainer Tracey Krajenke who received an Open World championship.  Very proud of the team work and scores well into the 70’s!

Congratulations Holly Miran from Fountain Hills, on the purchase of Kathleen Downie's 'R U Santana'. The best of luck to you!

Congratulations to Kathleen Downie on the purchase of a beautiful FEI gelding! Exciting times ahead!

Welcome to Equus Dressage 'Brendan Braveheart', Tami George's new Grand Prix partner! We are very excited for the future for these two. 'Brendan' is a half brother to the Olympic mare, 'Brentina'!
Tracey Krajenke is now sponsored by Equine Health and Performance/Tami George, Cavalor, Markel/Tami George Agency, and Amerigo Saddlery!

Congratulations Tania Radda on the purchase of 'Teodoro III', a gorgeous Andalusian gelding! Looking forward to an exciting show future!

High Prairie Dressage in Paker, Colorado was an awesome success! Anne Buchanan debuted her new horse 'Martini' and won three out of four classes and second in another to complete her scores for her bronze medal. Anne and 'Martini' were also Third Level Reserve Champions of the High Prairie Dressage II. Anne also won the USEF Four Year Old Championship on her horse 'Sky Hit' aka 'Vigo'. And won thier first 1-3 class with a 67% plus. Way to go!

Congratulations Lindsay Naas and 'Roy-Els Belle of the Ball' on their amazing wins at the Wheat State Regional Morgan Show! Lindsay and 'Belle' made a clean sweep of all three training level classes and had their highest score to date with a 68.2% to win training three along with being Training Level Regional Champions. 'Belle' also won the Justin Morgan Standard class. Winning it for the being the best example of the breed standard.

Job well done to Tami George and MA Sign of the Times on their Region 7 Championship win at PSG Half Arab with a 63.289%!

So exciting!!! Congratulations Anne Buchanan on her purchase of 'Martini'. A Hanoverian gelding by 'Metternich'. Thank you Bianca Berktold/Berktold Dressage!

Congratulations Anne Buchanan for being chosen to ride in the Nutrena/USDF Clinic with Hilda Gurney on her horse 'Sky Hit'!

Congratulations to Anne Buchanan and her 'Sky Hit' aka Vigo, on winning the Arizona Dressage Association Futurity at the Spring Celebration! You two rock!

Congratulations to the Equus Gang at the ADA Spring Celebration! (Some of you missing in the photo) You all did an amazing job and made me proud!
Congratulations Tami George on being USEF National Champion at Fourth Level/Half Arabian with 'MA Sign of the Times'!!!!

BEAUTIFUL!! Another awesome teapot by Equus client Tania Radda!
Congratulations Tami George for being ranked #1 with USEF at Fourth Level , Half Arabian with 'MA Sign of the Times'!!!!

Two Champions for Equus Dressage! Congrats to Christie Jones and her 'Pacific Patina' for receiving a title of Champion Hannoverian mare - Elite Status, and to Diane Morey and her Trakehner mare 'Merlot' for being Champion Non-Hannoverian mare.

A big high five, to a Reserve National Champion Half-Arab 'MA Sign if the Times' owned and ridden by Tami George at the Sport Horse Nationals in Idaho. Tami and Simon also received two Top Ten honors and place 3rd in the National Show-Hack class.

Congratulations to Mackenzie Krajenke on her new two year old Gangster filly 'Gansters Onen Only' aka 'Bandita'. She's very cute, so happy for you!

Congratulations Luanna Goltry on the purchase of 'Xila' (Sheila)! A lusitano mare originally from Portugal! So excited for you!

Congratulations Diane Morey on your new filly 'Ravin' out of her Abdullah mare 'Merlot' by 'Rubignon'!

Congratulations to Anne Buchanan on her gorgeous new boy 'SkyHit'! Sarkozy/Royal Hit/Don Shufro. Arriving to Anne from Germany in a few weeks!

Barb and 'Ready' passing the jog at Rolex. Dressage on Friday April 27th. Go get em' you two!

On her way! Safe journey to Barb Crabo and 'Eveready' as they make another trip to Rolex! We are all so proud of you and wish you the best! Get em' girl!!

Congratulations Mackenzie Krajenke and 'Yank the Lights' (owned by Lori Zeidman) on her Rider of the Year awards 1st place Junior/Young Rider at Training level and 3rd place Jr/Yr at first level. 'Yank the Lights' was also Horse of the Year in the number one spot Training-4th Levels with an average of 71.429%! This score was also the highest average overall at Training-FEI in all divisions.
- 'Yank the Lights' was also one of eight Quarter horses in the country to be awarded a high point trophy from AQHA that was given to the highest scoring Quarter horse at a Regional Championship Show.
Contratulations to Tami George and 'MA Sign of the Times' for being Fourth Level Reserve Champion at the Scottsdale Arabian Horse Show! Also, congratulations Diane Morey and 'Emerald Rubin' for her Year End Award with the Tucson Dressage Club ~ Second Level AA Reserve Champion!

-Congratulations Tami George and 'MA Sign of the Times' on their Horse of the Year award 7th place at 3rd level AA (training-4th level) and 3rd place Half-Arab award the Sandra Kale Trophy.

Congratulations to Lori and Steve Smart on the purchase of 'Blix' 10 yr. old Dutch Warmblood Gelding!

Congratulations to Diane Morey on the arrival of 'Rusty' her new Swedish colt by 'Rubignon' and out of her Abdullah mare 'Merlot'!
Tucson Dressage Club Winter Heat Show  January 22-23, 2011
Congratulations to Mackenzie Krajenke and 'Yank The Lights' on their JR/YR Highpoint At Training -Second level. 'Yankee' is owned by Lori Zeidman. Good job to all at the show and special congrats to Sara Winkleman on her 2 highest scores at I-1 winning both her classes at her first show as an Amatuer!  Everyone came home with a blue or more!!

Great job to Tami George and her 'MA Sign of the Times'  at the Scottsdale Arabian Horse Show February 17-27 2011. The pair were the Third level Reserve Champions!!

Arizona Dressage Association Spring Celebration April 2-3, 2011
Great job and team work to the Equus bunch at the show!!  Lori Smart and her new horse 'Blix' made their debut and so did Michelle Beckerman and her 'Grayc' at Second level!. Another congrats to Mackenzie Krajenke aboard Lori Zeidman's 'Yank The Lights' for being the JR/YR High Point winner at Training level with a 72.8%, for also winning the "Endless Summer" Champagne Bucket trophy for highest scoring JR/YR at Training-First level, and for winning the highest scoring Quarter Horse award Training-First level JR/YR-AA. This will be the fourth time this award has been won by 'Yankee'- one of those times being won with Lori Zeidman (owner) aboard. Once again lots of blues and loads of fun!!!!

Congratulations to Tami George on her AHA Region 7 Dressage Championship win at 3rd level with her 'MA Sign of the Times' (AKA Simon). Tami also won the Open Show 3rd level class prior to the Championships. Good job! The Region 7 Championships were held in Scottsdale, Arizona.

Congratulations to Mackenzie Krajenke on her AQHA Youth Top Ten award in the Limited division with her horse 'Chocolate Lady Chic'.

Congratulations Mackenzie Krajenke on winning first prize for the National Reining Horse Association photo contest in the 14-18 division with her photo "The Admirer". This Will be Mackenzie's third win for this contest. This photo will be published in a national magazine.

Congratulations Barb Crabo and 'Eveready II' on winning The American Eventing Championships at the Advanced Level in Fairburn, GA. Barb and 'Ready' were also the USEF National Advanced Champions.

Congratulations to Diane Morey's Trakehner mare, 'Merlot', for being accepted into the Main Mare book for the Swedish Warmblood Association of North America. Class I Classification AB-highest attainable rating for Swedish approved mares.
Another victory for Tami George and her 'MA Sign of The Times', the pair were year end USEF Region 7 Half Arabian  Open and Amatuer Third and Fourth level Champions!
Congratulations Barb Crabo and 'Eveready'! 'Ready' is ranked 6th in the nation with USEA and Barb is ranked 18th in the nation for 2011.
Tami George and 'MA Sign of the Times' do it again! Tami and 'Simon' were third nationally with USEF in the Half Arab division at Third Level Open and Amatuer level. Tami has also won all of her Fourth level classes at the November and December Arabian horse shows in Scottsdale. Scores in the mid-60's for 2011!
Congratulations Mackenzie Krajenke and 'Yank The Lights'(owned by Lori Ziedman) on being USDF Region 5 Reserve Training Level Jr/Yr Champions and for being High Point Champions for AQHA at a USDF Regional event!
Great Job Tania Radda and 'Yogi Brusco' for placing 3rd in the Amatuer divison in the Arizona State Championships! Also to Mackenzie Krajenke for placing 4th in both the Training Level and First Level Jr/Yr division in the Arizona State Championships!